While snapping pictures of our Rose of Sharon bushes, I snapped this dynamic photo of a bumble bee. She was laden with pollen already, and her poking around in the flower caused a spray of pollen speckles.

Hellebores Under the Snow

We had over 18 inches of snow one day in December with more piled on top after.  It finally melted and this was underneath – hellebores.  Although a little bedraggled, they looked great considering! They sure seem to love the snow.

I was Going to Blame the Deer

All of the flowers that have bloomed have disappeared.  The buds that are unopened are still healthy.  Upon close inspection, it was apparent that something was eating all of my flowers!  Deer regularly cross my yard fairly close to the location of this flower bed, so the logical conclusion was that the deer were responsible even though  I was a little confused when my brand new “deer resistant” purple coneflower disappeared overnight.

However, when I was taking this photo, the real culprit revealed himself.  Or herself. 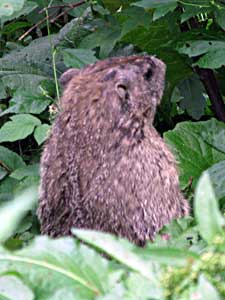 Now what do I do?

There is already a flower on our Randers Pride daylily!  The color of the lily is exactly as I remember and the flower is very large.  It does look a little odd though, the flower stalk should be much taller – it is only about 18 inches tall.  I think that it should be twice that.  I imagine that as the plant grows larger, the height will come along.

This phot was taken on a rare sunny day here in northeast Ohio!  We took advantage of the nice weather, and put Katie to work.

Over the weekend, we bought some day lilies today from Heritage Farms in Peninsula, Ohio.

These extra special flowers are called Randers Pride. My family bred lilies up until the late 1950’s. This flower was named after my maternal grandfather, who’s surname was Randers; I believe that he was the one that developed the flower.  It was registered by Libis-Cheetham. Libis was my maternal grandmother’s maiden name, so that would be my great grandfather, but unfortunately, I do not know who Cheetham was. This flower is extra special to me because it was registered in 1957 – the year that I was born. It helps that it is a quite tall plant with beautiful large yellow flowers.

Here are the three Randers Pride plants nestled into their new home, along with 2 friends named My Kia.  You didn’t think that I could possibly only buy what I went to purchase, did you?  My Kia was described as “quite prolific with red flowers”.  Oh, the human is my daughter, Katie.

Spike, the dog, thought that she was quite camouflaged while hiding behind the bee-balm. She was a good helper too. 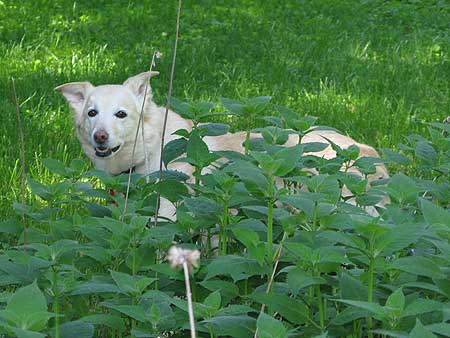